We are happy to announce the availability of full disk Yohkoh Soft X-ray Telescope (SXT) images on helioviewer.org. SXT images x-rays from the Sun, and therefore looked at some of the hottest plasmas on the Sun. These data are important in trying to understand solar flares and the heating of the Sun’s corona.

Yohkoh (“Sunshine”) was launched in August 30, 1991, from the Kagoshima Space Center (Uchinoura) in Japan, and was a project of the Japanese Institute of Space and Astronautical Science (ISAS). The scientific objective was to observe the energetic phenomena taking place on the Sun, specifically solar flares in x-ray and gamma-ray emissions.

SXT imaged X-rays in the 0.25 – 4.0 keV range. SXT used thin metallic filters to acquire images in restricted portions of the energy range. We are making images from the thin aluminium filter (thin-Al), and the aluminium-magnesium-manganese filter (AlMgMn) available. White-light images are also available up until November 1992. An example thin-aluminium image is shown below. 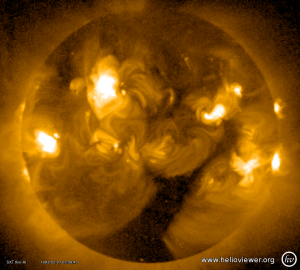 SXT could resolve features down to 2.5 arc seconds in size. Information about the temperature and density of the plasma emitting the observed x-rays was obtained by comparing images acquired with the different filters. Flare images could be obtained every 2 seconds. Smaller images with a single filter could be obtained as frequently as once every 0.5 seconds.

Yohkoh ceased operations on December 14, 2001. The SXT images we are making available cover portions of Solar Cycles 22 and 23 (we are currently somewhere close to the maximum of Solar Cyce 24). This historical data allows us to compare current solar behavior to previous solar behavior. Such studies allow us to better understand how the Sun operates on timescales of decades and longer.