Coming up: Comet ISON in November 2013

You may have heard of Comet ISON, a comet discovered last year that is currently approaching the Sun. It is expected to be visible in the SOHO-LASCO C2 and C3: from SOHO’s viewpoint the comet enters from the lower right early on November 27 and exits towards the top near the end of November 30 this year. 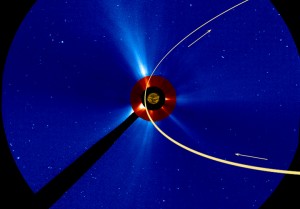 Path of COMET ISON as seen from SOHO LASCO C2 and C3 coronagraphs.

It will also be visible from the COR1 and COR2 instruments on board both STEREO spacecraft. The SOHO Hotshot webpage for Comet ISON has many more links to more details on the path of the comet as seen from SOHO and STEREO. At the moment it looks like this, as seen by the Hubble Space Telescope. It might be a spectacular sight from Earth. The appearance of comets from Earth is hard to predict because how it looks when it gets closer to the Sun depends on the details of its composition. We’ll have to wait and see!